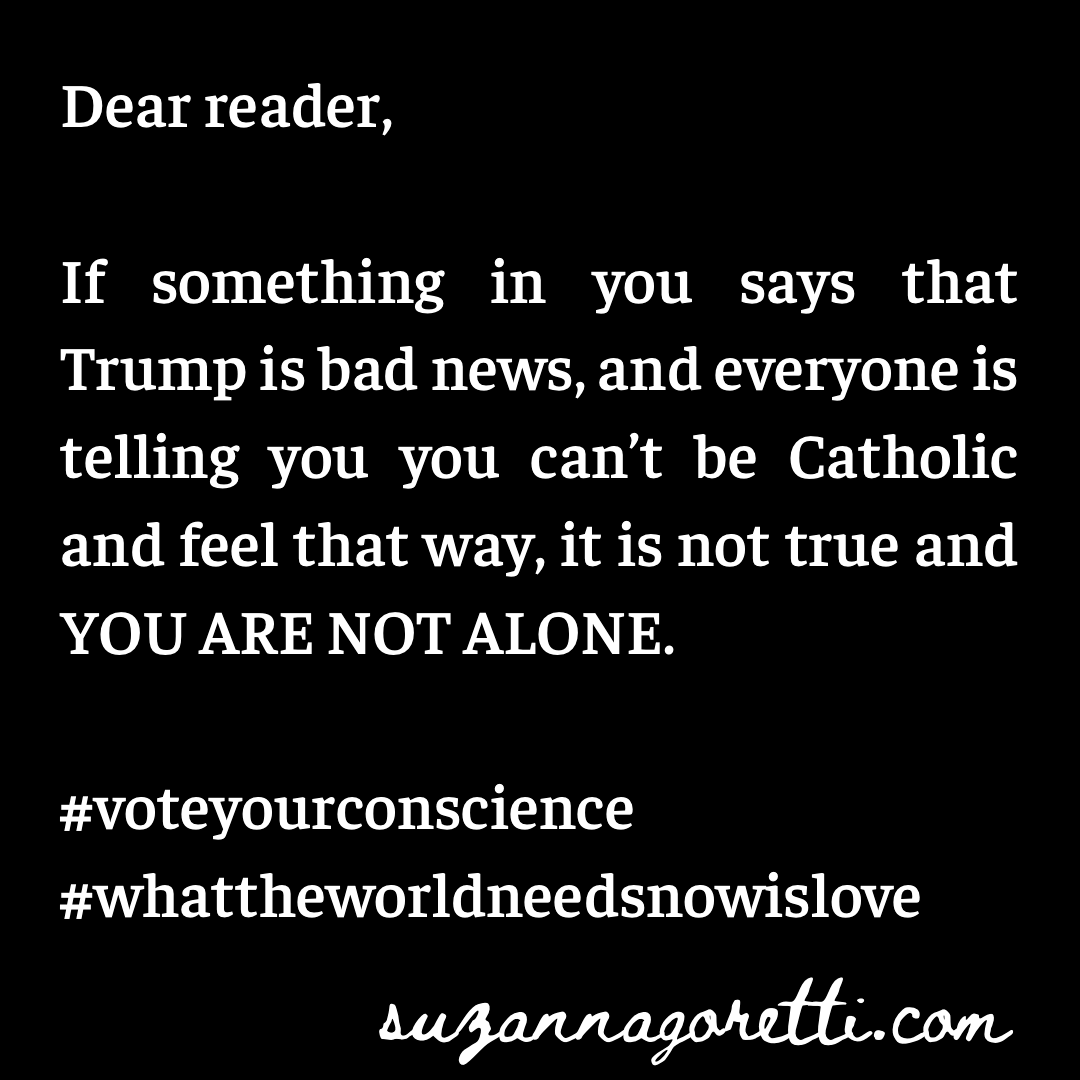 Four years ago, I was working in an ultra-conservative Catholic school. I had worked for three years to get into a teaching position at a Catholic school because I wanted to feel like I had a community of faith around me to support me. It was a whirlwind of chaos getting there and turns out I was pregnant, and that’s a whole story for another time, but right now I want to talk about a specific struggle I had when I was there.

I was terrified of Trump, even then. He wrote speeches where he talked about being unafraid of releasing nuclear weapons, he switched to being pro-life too soon before his election for me to believe in him, and he was unkind. However, almost everyone around me supported him, and not just as a lesser of two evils, they were excited about him. I was so confused and lonely.

I remember one argument very clearly where I was sitting in a rolling chair nauseous and pregnant, listening to a man speak, I don’t remember his words, but I remember that he was incandescent about Trump and very clear that he did not care about my concerns about him. I vaguely remember him insinuating that it was a mortal sin if I did not vote for Trump. Thankfully, there was a friend next to me who at least expressed sympathy for my dilemma, although she said she could not bring herself to vote for Hilary, and I was honest that I didn’t think I could either.

I vaguely remember his statement because it was one of so many times that people said similar things around that time, the memory of how condemned and unworthy I felt the entire year I was there is not a pleasant one and the brain has mercifully been programmed to allow extremely unpleasant memories to float away when they can. However, I do remember another instance with stark clarity. It was days after Trump’s comments “grab her pu**y” was released. The chaplain of the school stood at the altar and announced to the students that we could never support someone who promotes cruelty to women, but we must vote for Trump because he is pro-life.

My stomach turned inside of me. My heart was racing and hot as I looked around at the students wondering if their hearts were as confused and scared was mine was…well, still, is. How could we vote for a president who would speak this way? Worse, how could we vote this way without taking the time to discuss how grave and monstrous a decision this would be? How could we not explain to the students that this is an issue of moral conscience that has important consequences for the future and we must follow what we believe is right?

I learned later that Catholic Social Teaching does indeed teach that we should support politicians who support life. HOWEVER, it also teaches that if there are other significant issues at play, we are permitted to vote for a pro-choice candidate. This was never mentioned at the school I taught at, and it was taught incorrectly by that school, and by nearly all the Catholics I spoke to that year.

After hearing that sermon, I wrestled through the rest of my day and collapsed into tears at the chapel when I was done. Sobbing, I prayed about my confusion. I poured out my fears and horror at who Trump is, and my confusion about why no one else could see it. The same priest came into the confessional and I brought my fear to him. I confessed my sins first, and then weeping I poured out to him how desperately I wanted to fit in with the Church and how again and again I kept feeling like there was no place for me. I cried out to him about how afraid of Trump I am.

My whole body turned white hot in terror as he said, “Well why don’t you just leave then.”

As the world spinned around me I caught moments “Voting for Hilary is a mortal sin…..if you can’t see that…” …

I felt so alone. Condemned by a priest, isolated among all of the peers I had worked so hard to come to for support, terrified at the choice America was being asked to make. I left the confessional weakly and in a greater state of fear and doubt than I went in.

Fast forward about 2 months, with every bit of courage in me I went to vote, convinced my vote didn’t matter anyway, but I had to try. I stared at three names on the ballot. Terrified that God would hate me, but knowing that I could not go to the Last Judgement and say I voted for Trump, and I could not face my children and say I voted for him either, I went against what the entire community around was saying. I could not bring myself to vote for Hilary either, so I voted third party.

That night I was so sick that I stayed up all night to watch the election. Between bouts of severe morning sickness, I watched as the country around me elected a man I sincerely believed was evil. I watched as the red states claimed more and more space, and as CNN desperately tried to pretend Virginia would be enough to save them. As horrified as I was at the time, I could never have guessed the darkness that would actually come from this presidency.

I imagined him hitting the button on nuclear war, but at the same time, I didn’t think he actually would. More realistically, I thought he would just be rude, and continue the war more intensely than I liked. I could never have imagined the hundreds of thousands of deaths that could have been avoided in our country, the children who were stolen from their parents, and then went missing, or neglected under government care, the tweets he puts out that encourage violence and destruction in a way that sounds more like a comic book villain than any human, and his flagrant and proud disregard for the poor(check his tweets about low income housing or my own article about it.)

I have never been more proud of a moment in my life than the one when I decided I could not vote for Trump. Every time I see what he is doing, I can say, I did everything I could to keep this from happening. More importantly though, I remember how lonely I was in it, and how scared I was. This year, I want to make sure that no one feels that way. You do not have to agree with me. If your conscience says you must vote for Trump, then please do that, but if something in you says that what he is doing is not ok, then I want you to know that YOU ARE NOT ALONE.

Every single time I post about the election this year, I post because I want to make sure no one feels how I did last election, scared and alone. I hate talking about politics, but I believe this election matters in a way that maybe no election ever before did. I want you to know you are loved whatever you decide, I will love and support you.

That being said, I am very excited about Biden, and I believe in him based on the information I have received. I believe that he is exactly what our country needs right now. I will explain why in future posts, but I will also post about HOW to make the decision, what resources religious and political I use, and maybe even have some other featured authors post their own work.

Subscribe to my blog to get alerts when new posts are released and stay tuned for a love-based take on Election 2020.