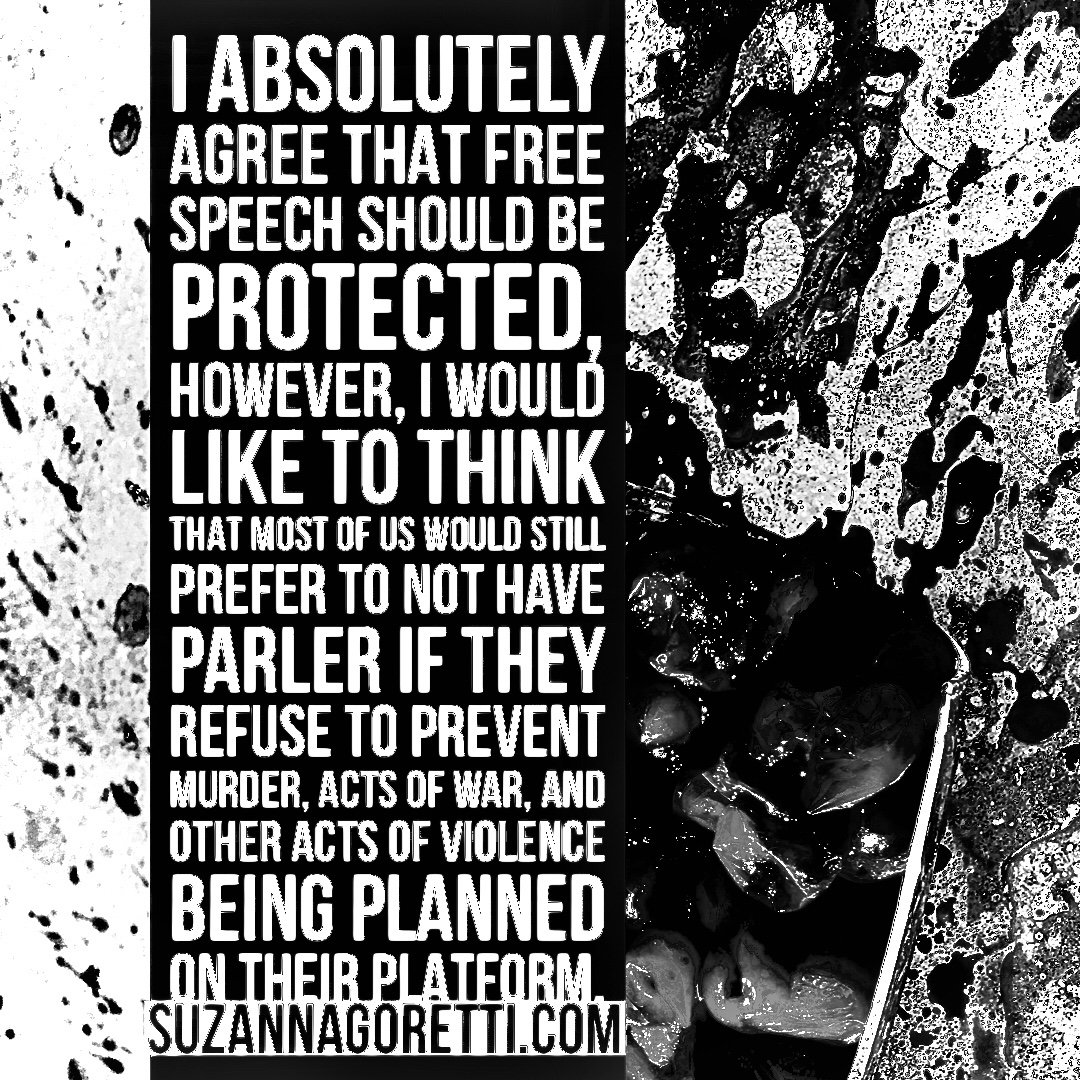 WARNING: Proceed with caution. Please understand that it is impossible for me to give evidence to you of how dangerous Parler has become, without showing you the ugly side of what has come from Parler. I don’t want to read these either, but if you are worried that the shut down is about free speech, I hope this post will help you understand a different perspective.

When someone close to me asked me to prove that Parler is dangerous and that the shut down is not an enormous act against the first amendment, my first impulse was to comment back something snarky, like “If you don’t see how this is not the issue, I can’t help you,” or “You will just ignore all my sources anyway,” or “I don’t really feel like being cyber tarred and feathered today.” What I really meant by those things I said in my head was, “I’m scared. My anxiety gets worse every time I read the screenshots from Parler. I don’t want to look for more.” Many of my friends are at a point of writing off all republicans, but I believe that there is good in many of them, and that there is hope for unity between all of us.(Let me clear that this has a big side note that for lawmakers and participants in Wednesday’s events and even those who have made horrible comments to others, that they must be held accountable for their actions.) I waited until I felt like I could emotionally hand the search, and I sent her what I could find. Here are the results.

“Something that you need to understand is that I feel sad for the founder of Parler that this happened. I agree that peaceful protests should be allowed, and that everyone should have free speech-when it is safe.

I have personally seen several threads of people planning gruesome and horrific things on Parler. As I did not save them(because I did not want to ever see them again,) I am posting articles that mention the same or similar ones.

I also want to add, I am not saying that this is all that is on Parler. I’m saying that because they have refused to put a stop to these comments, it’s a good idea to shut them down especially right now. 4chan, 8chan, and Reddit all have some perfectly fine threads, but we all know that they have severely dangerous content as well. However, Parler is the main site known for coordinating the violence that happened Wednesday which is a bigger attack than what has been planned on the other, and they are currently planning two more attacks, as you will see in the list. “Million Militia March” is not in any way pretending to be a peaceful protest. They specifically state to bring weapons.

As far as comparing what happened last week to what happened this spring, that is a huge false equivalency the purpose between those riots and these is so vastly different. However, regarding the social media use to plan protests, no one is complaining about planning peaceful protests, and as far as I saw, social media tried to keep up on people who were planning violence in the spring too. I remember several threads of FBI and police asking for tips and receiving them.”

On the last one, I would like to point out that the hashtag to kill Mike Pence was trending on Twitter as well; the difference is they shut it down.

For more information here are several articles that speak specifically to violence as the reason that Parler is being shut down, as well as discussing specific instances of violence on the platform. I chose gadgets.com, fortune, and Forbes, because they are business focused not politics, so their coverage is close to a-political, they cite the facts of what exactly Parler is in trouble for. SFGate and NYT are obviously liberally biased, but their comments are helpful in understanding the points I am making. A couple of them also mention the Million Militia March and violent protests that are already being planned for next week, and making no secret of the fact that they will be armed.

Policemen reported to the FBI

In conclusion, I just want to say that I absolutely agree that free speech should be protected, I have a vested interest in it, especially because of other controversial issues I differ from popular opinion on, however, I would like to think that most conservatives would still prefer to not have Parler if they refuse to prevent murder, acts of war, and other acts of violence being planned on their platform.

I hope that we can unite on concern over this issue, and pray for protection for our country over the next weeks, while working towards a unity that accepts all people, while also keeping people on both sides safe.